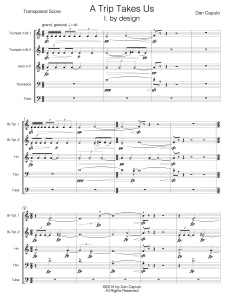 A Trip Takes Us for brass quintet uses a two-movement formal structure to create a musical metaphor for the ways in which people plan. The first movement, “by design,” acts in a modus operandi where some force attempts to urge musical materials to behave in specific ways. Opening fanfare gestures make way for a rhythmically active music that attempts to reach a satisfying peak before falling apart. The second movement, “emergence,” employs a more humble approach; simple musical materials are allowed to run their course until a desirable destination is reached. Similar to a theme and variations, the music uses repeating phrase structures in order to generate organic growth.